Founded in 1598 as a wholesale dealer of cotton at Iida city, Nagano, Japan.

On April 20, 1947, while the Nohara family was under the leadership of the thirteenth-generation heir Koichi Nohara, a great fire broke out in Iida City. The fire almost completely consumed the center of the city.
With only a small part of the Watahan storehouse surviving, the fire motivated Koichi, then 62 years old, to declare that he would transfer the reins of the business to his 32-year-old nephew Tatsuya (the founder president) and 28-year-old firstborn son Kokichi (the second-generation president).
Although the announcement took the two young men by surprise, they began the work of reconstructing the business from the charred rubble, keeping Koichi's words in mind: "Starting today, I leave you two in charge of Watahan. Do your best to work together. Don't forget the reputation that Watahan has built."

A Popsicle in Summer

What kind of business could be launched immediately in a city devastated by a massive fire? Why, Popsicles of course!
Tatsuya and Kokichi purchased a plot of land measuring about 130 square meters, and built a two-story barracks on it. After buying a state-of-the-art large-size refrigerating machine, they opened a café called "Alaska."
As its popularity grew, they loaded wooden cases of Popsicles onto bicycles and walked all over the city to sell them in places like parks and baseball fields.
Thanks to the strong initiative of the two young owners and their employees, sales of "Alaska" boomed. Within a single summer, they were able to redeem the cost of the refrigerating machine and even make an operating profit.
Tatsuya and Kokichi would later build on this success to leave Iida and finally make moves toward the establishment of a new company in Tokyo.

NOHARA CO., LTD. is established in Odawara-cho, Chuo-ku, Tokyo with ¥195,000 of capital and starts the construction materials business.

At the end of the summer, Tatsuya and Kokichi shut down the Popsicle shop and sold the refrigerating machine to generate capital.
NOHARA CO.,LTD was born in Tokyo on September 11, 1947.
Tatsuya and Kokichi filled all the other positions on the board of the company with employees of the former shop in Iida, rather than their own relatives.
Having broken away from private management, they expanded their capital more and more until it had increased tenfold within just a year.
Meanwhile, they also implemented an "employee shareholder system" by putting aside 20% of each employee's monthly wages toward the acquisition of company stock.
NOHARA's management philosophy of making the best use of human resources and always working together with employees to protect and grow "their own" company served as the foundation for building the massive Watahan and NOHARA business groups within a single generation. That core remains unchanged to this day.

"If you can make it three years at NOHARA, you'll be successful anywhere." The rigor of the work and strict discipline at NOHARA were apparently legendary.
The company put great effort into its mimeographed guides for young employees.
With principles such as "Salesmanship," "28 Rules for Out-of-Store Sales," "The Rational Method and Tips for Collection of Receivables," and "Working Guidelines for Female Employees," NOHARA's comprehensive human-resource development characterized by a tough work ethic but fairness and respect toward individuals was reflected in its public reputation. 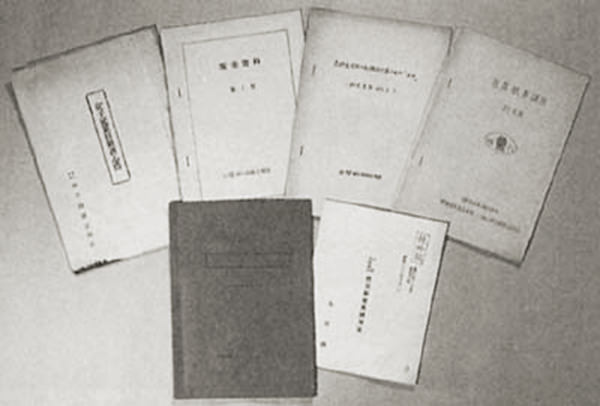 New office building was completed in Shintomi-cho in Chuo-ku,
Tokyo.Headquarters was moved there.

From 1951 to 1953, NOHARA intensively sold fluorescent bulbs manufactured by the US-based Duro-Test Corporation, known as "the brightest and longest-lasting in the world."
This was an era when there was considerable variation among domestic goods, so by publicizing the top-ranking quality of the bulbs, the obscure startup company ,NOHARA, was able to deliver sales results strong enough to threaten major domestic manufacturers.
However, once the company decided to venture beyond mere acquisition of domestic distribution rights and into production and sales in Japan, it experienced the economic climate of tight controls on imports that characterized the postwar economic recovery period, as well as large companies' power to crush small and medium-sized dealers.
Standing at its single most critical juncture, NOHARA made the decision to focus on its primary business, construction materials.

Signing a distributor agreement with Nozawa Asbestos Cement Co.
(present Nozawa Corporation) gives the company a foothold in the building materials sales business in addition to the existing line of products such as bolts.

Volunteerism and the Birth of the Ryukyo Foundation

The founders received many requests from their hometown of Iida City to serve in social positions. However, they firmly declined those requests based on the Nohara family's teaching passed down over generations— "Reject all positions, and devote yourself to your primary business."
Nonetheless, they were enthusiastic about welfare targeting the local community. In 1953, a time when the concept of "volunteerism" was not yet entrenched, they launched the Ryukyo Foundation even as the emerging company was still busy trying to secure funds. 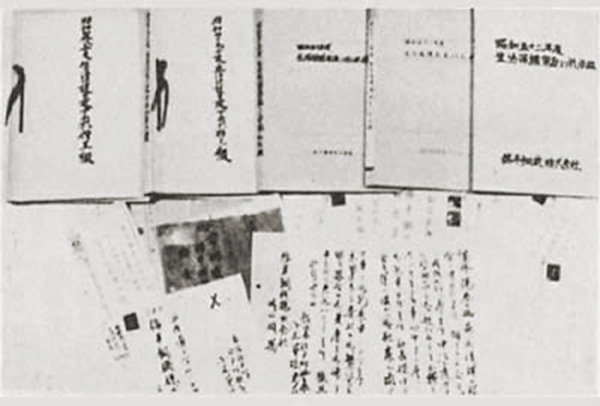 During the late 1950s and early 1960s, new synthetic resin construction materials such as plastic pipes and corrugated panels emerged in addition to iron and cement.
Around this time, the Matsumoto branch received an offer to partner in the sale of a smokeless furnace. It was a patented product that provided better thermal efficiency and produced less smoke than existing ones.
Showcasing this unique product, NOHARA searched for well-financed, reputable hardware stores throughout the region and actively demonstrated it.
These demonstrations spread steadily but consistently, establishing footholds for business relationships with prestigious local stores.
In other words, NOHARA was able to sell in-demand products such as new construction materials through these newly created routes, leading to tremendous growth in sales.

"Fuji Lights," invented and produced by the "Fuji Reflection Institute," is dealt.

During the late 1950s, road traffic improvement projects were stepped up as the era of privately owned cars steadily approached.
"Fuji Lights" was reflective sheeting capable of reflecting light like a mirror. It drew attention as a domestic product that could rival "Scotchlite" manufactured by the US-based 3M. In 1958, NOHARA began handling the product on a full scale, with the catchphrase "Fuji Lights shine all day and night."
This product marked NOHARA's first entry into road signage, a brand-new field outside its traditional domain of construction materials. 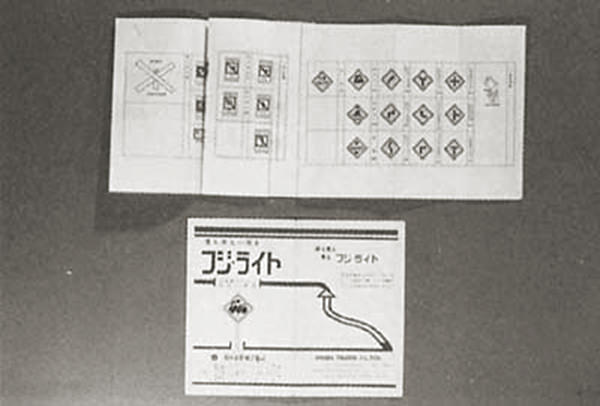 Capital is increased to ¥100 million.

Nohara Soueikai is established, a member Association for the NOHARA CO.,LTD.'s clientele in Japan.

Capital is increased to ¥200 million.

Capital is increased to ¥330 million.

Capital is increased to ¥430 million.

Shonan Office is moved to Atsugi-city, Kanagawa and is renamed as Kanagawa Central Office.

ISO9001 certification is obtained at headquarters.

Wallpaper brand "WhO" is released.

"aunworks" ,the largest e-commerce site of construction materials, is opened.

Changed our group structure in which all business will be led by a holding company, Nohara Holdings, Inc.